The Pottery Business in The Felling 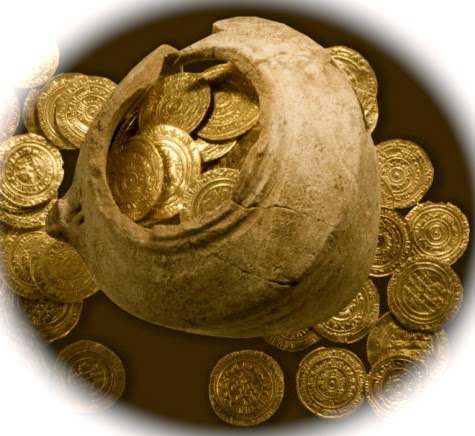 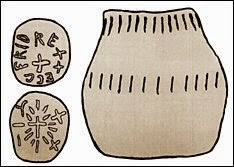 This is a drawing of the actual cup and coins.

There's a great long illustrious list
Of Famous Felling Folks
Including the anonymous genius creator
Of The Heworth Hoard Hoax
A new pub chose Cup and Coins
A worthy name, to its credit
Unfortunately, that's the only thing
The pub's had, of any merit
It's now on its third name
No doubt it'll change again, quite soon
May I make a suggestion
The Last Chance Saloon
(That was meant to be sarky...but actually it's a great name)

Anyway, this article is not about that potty business
It is about how the manufacture of pottery featured in The Felling's history

Not a lot is known, but....here's what I've found.
Newcastle Chronicle, through its advertising columns sheds a little light. The following appeared on Nov 3, 1759
"Wanted immediately, and will be let on reasonable terms, a Co-Partnership in a current going Pottery on Heworth Common, near Gateshead Turnpike Bar, commodiously situated for Clay and Coals. Where is made Tortoise-shell, Agatestone and Black Ware, to great perfection, with a variety of other kinds of earthen ware’
Thomas Sill and John Codling, were also the owners of potteries in Heworth. Little, however, is known of their pursuits"
Elsewhere on a genealogy site there is this
“John Codling ran a pottery business in Felling Shore and Sheriff Hill in Gateshead in 1830-40's. He went bankrupt in 1844 when in business with Thomas Patterson in Sheriff Hill (reported in London Gazette). In 1851 he was over the Tyne in North Shields living at Brewery Bank and again working as a potter. He died there in 1872.”
and this
“George Patterson ran Tyneside Potteries about this time in Gateshead and John Codling may be related to the Pattersons as one of his daughters was a servant to Ephraim Patterson and recorded as the latter's niece. John's first marriage was to Sarah Patterson a daughter of Ephraim.
and this
“Heworth Shore
At the Tyne Pottery, belonging to Messrs. Thomas Patterson and Co. white and coloured flint-ware are manufactured; and common brown earthen ware is made here by Mr. Joseph Dawson, and also by Mr. John Codling.
An historical, topographical, and descriptive view of the county palatine of Durham 1834”
and this
“Thomas Patterson and I have been researching for the last 6 years or so. I have managed to purchase a piece of pottery which is believed to be manufactured by Patterson & Codling. In fact one of Thomas Patterson's nieces married a John Codling whom I believe may be the son of John Codling.
The number I bought last year includes a piece stamped P & C (Patterson & Codling) and P D C (Patterson, Dawson & Codling).”

I have the book "The Potteries of Tyneside" by R.C. Bell and M.A.V. Gill who say this of the

Tyne Pottery (circa 1821)
The pottery was under the management of T. Taylor & Co. until 1827 when that management moved to the Newcastle Pottery. The Tyne Pottery passed to Joseph Wood, and in the same year to Thomas Patterson, there until 1829
In 1833 a directory lists Codling & Co there but in 1837 Patterson & Co is listed
Sorry, but that's all I've come up with, thus far

This History of The Felling Blog is a satellite of www.gateshead-history.com